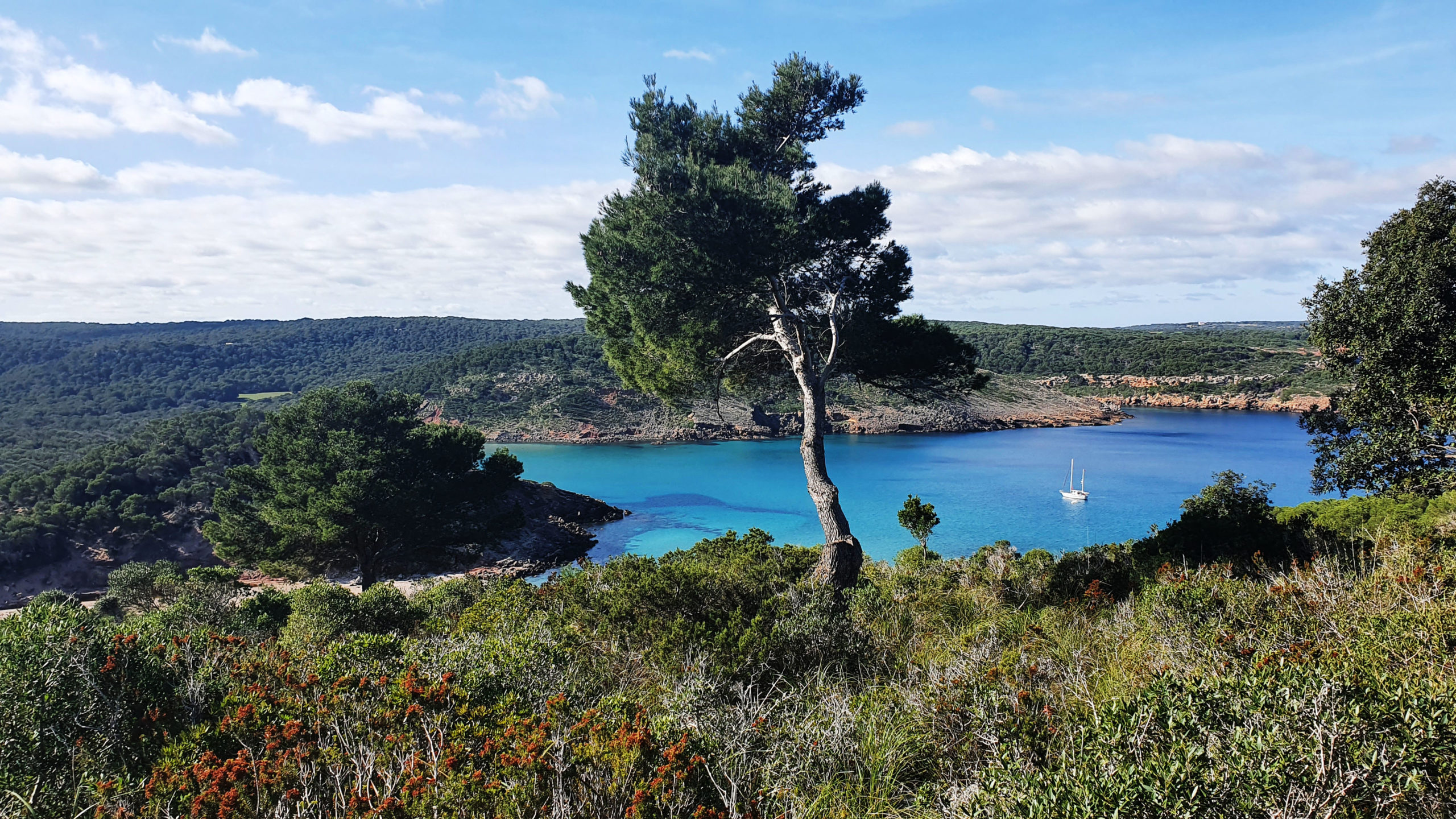 All I knew about Menorca was that this place existed. Somewhere. All the more surprising is the encounter with an island where at first they don’t want to let me go ashore.

Thursday evening, shortly before five. After the crossing from Mallorca, I radio Ciutadella’s marinas. Sheer horror on the other end. At 11.99 metres, my ship is too long for your port, says Ports IB. I have to show a Coronatest, says Club Nautico, they haven’t received a tourist ship for weeks. Finally, because it’s probably closing time at five o’clock, they send me to anchor in Cala Degollador, a narrow bay next to the harbour.

There, the wind freshens the next morning and shifts crosswise. Reykja approaches the side rocks close enough to touch. In a panic, I somehow pull the bulky stern anchor loose with brute force, escape from the trap, drift in increasingly choppy seas and make one last desperate attempt over the radio. Lo and behold: this time Ports IB speaks good English. At first, the official reprimands me: Corona times are not the time for tourism. When I suggest that I could sail back to Mallorca, his local pride is obviously taken – at least he lets me land. There’s no more talk of a PCR test, I’ve been on the neighbouring island for months, and Reykja’s length is suddenly fully suitable for the marina.

The redeeming feeling: This is the right place for me. It comes after a few steps in the harbour of Ciutadella and will not leave me again for the following weeks. While Mallorca was a single pulsating urban centre for large parts, Menorca is a full province. Stylish province in Ciutadella: palaces, a Gothic cathedral, two huge squares, old houses, narrow streets. Outside the city, it becomes lush green, hilly and very stony. Mortarless walls criss-cross endless pastures with cows. A piece of England in the middle of Spain.

Stones wherever the eye looks, limestones to be precise. Only two capes, which I later round, are spectacularly made of red slate. Already the Roman army, my pilot-guide knows, hired local Menorcans who could sling stones so effectively. And their ancestors built an entire culture out of stones. Now it’s time for my folding mountain bike: around seventy sites of the Talyot megalithic culture are known on Menorca. A voyage of discovery begins.

No two sites are alike. Torretrencada: I am amazed at the round ground plans of the stone houses. Everything seems harmonious. Why do our cities consist of corners and edges? Son Catlar: An intact protective wall full of military secrets. There are extra thin places to escape, or to spy on the besieger at night. At the entrance, the wall curves inwards so that it can be shot at from the side by watchtowers. Torrellafuda: A taula under olive trees, standing menhirs as heavy as murder, which no one would lift voluntarily today.

Can I understand why people did this three thousand years ago? Today’s places are changed. The stones were removed and moved by farmers for centuries for their own building projects. Olive groves only grow in modern times. Nothing is as it was. And yet: something is there.

I start circling the island. No shocking mistral storm is forecast for the next eight days. I venture to the north coast, lonely and the only boat. In the inlet of Cala Fornells, I anchor for over a week, bring my bike ashore with the rubber dinghy, explore the interior of the island, carry 15 litres of petrol in my backpack from a remote petrol station. One day of strong winds with gusts of 8 Bf. I can safely weather on a long chain. I take a look at Cala de Addaya, praised in the Pilot Guide, from my bicycle- and find it far too narrow to anchor in a strong easterly wind. Isla Colom in the east offers good protection, but the swell from the north fits right behind the island and makes life rocky.

In Marina Menorca, Mahon, the capital, I get ripped off and pay the highest mooring fees (70 euros), twice as much as in Palma de Mallorca. Shopping and laundry can’t be done without a twenty-minute walk with a backpack to the upper part of town. I walk it a dozen times.

Escape to the south side of Menorca after three ruinous nights. At first glance, it seems more blighted by tourism, but not everywhere. Spectacular are the Calas Covas with burial hippie caves wherever the eye looks. I do the doctor on anchoring, the wind blows me out of the bay, the waves come from the front. I try to lay a shore line with the tender as the ship slowly drifts away. A surprised jogger on the shore, whom I call for help, flees from the bearded English-speaking sea monster. In the end, all I have left is the laborious stern anchor. With a guilty conscience, I start long hikes to the talayots. But in the evening my ship is still there.