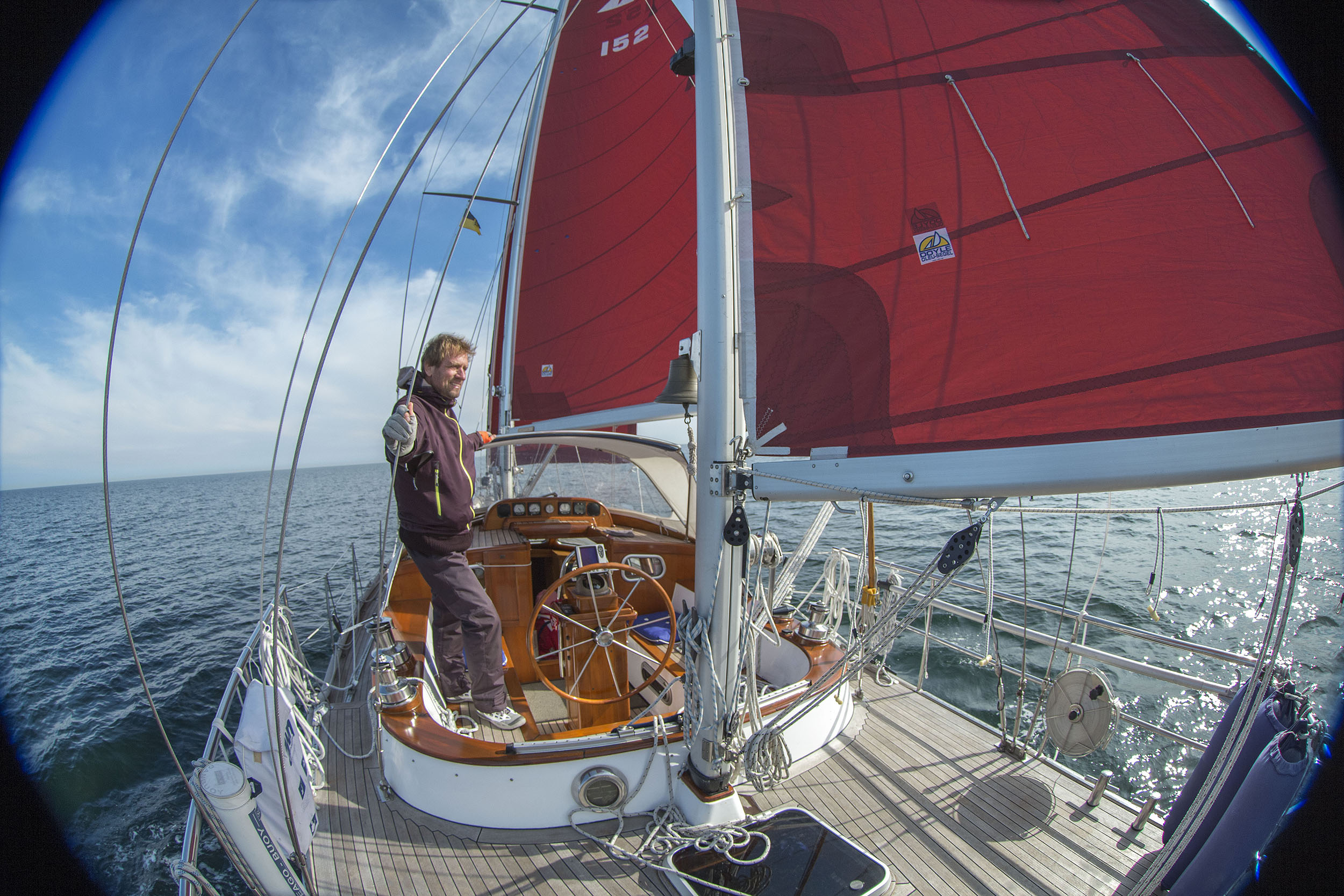 Twelve meters of steel, two masts, one ketch. Fifty years ago, the ideal blue-water yacht looked like this, the legendary JOSHUA by Bernard Moitessier for example. Today, the Ketch-Rigg is out of fashion, as are long keel and rudder skeg. PINJOE – built thirty years ago – has all the attributes of these classic sailors. Have I found the perfect blue-water yacht?

Motiva was a Danish shipyard that threw in the towel during the 2008 economical crisis. PINJOE is a Motiva 39 S, heavy, robust and cumbersome. Their shrouds measure eight to ten millimeters, the hull is made of 5 millimeters of flame-galvanized shipbuilding steel. She weighs 15 tonnes, with a total length of thirteen metres. A comparable modern ship made of GRP weighs half and sails twice as fast. Almost …

To bluff – or not to bluff

What attracts and repels: The construction of PINJOE is sort of exaggerated. There are tons of wood, both inside and out, screaming for paint, polish and citric acid cleaner. There is a completely oversized Ford Lehman engine with 135 hp in her belly, with great diesel sound. But thanks to it, with stand-by gas PINJOE is already raging through the harbour with four knots. It swallows at least four litres of diesel every hour. There are red-brown pirate sails hanging in the rig, which let every sail maker immediately reach for the surcharge price list. The builder of this yacht wanted others to look – at all costs.

Is it worth it? I look at wonderfully designed Scandinavian carpentry made of teak wood. And I gaze from the sofa in the deck salon through huge windows at the entire surrounding panorama. Such a view can hardly be found on any other yacht. Everywhere (why only?), one dives into the dark belly of the ship for boat life, cooks, talks and sleeps between walls – at best with a view through slits into the sky. I’m afraid to push depression in a classic yacht at rainy anchorages.

Is it right for blue water?

I have set myself a budget of 100 000 Swissfrancs. PINJOE is a little bit above that. The owners seem likeable. The ship seems to be in good shape. The boat builder from Burgstaken, Fehmarn, inspects it straightforward within two days and signals a green light. Finally, aesthetic feeling triumphs over maintenance work, belly beats head, how could it be otherwise? I decide that PINJOE is the right blue water yacht for me and I buy it.

Of course, doubts remain. Until now, PINJOE only sailed on the Baltic Sea. Can I turn it into a yacht that can sail in high latitudes, in stormy and icy areas? In my back of my head are pictures of Iceland, Greenland, Antartk peninsula … Definitely PINJOE is not one of these 4×4-like expedition yachts made of aluminium, with lifting keel and reinforced bow, which are built today for such areas. These are cool boats, but priceless for me. PINJOE is slimmer, prettier, more vulnerable. How much money will it consume until it can keep up with aluminium expedition yachts?

Conversion to a blue-water yacht

First, I give PINJOE a new name – against seafaring habit and superstition. I don’t want to take names from strangers. I call it REYKJA (here as a meaning). Then, at the beginning of June, I put them back into the empty hall of Burgstaaken on Fehmarn, while all the other boats wander the opposite direction into the water. I have to spoil my summer with the agonizing mile-trips that the Swiss high seas certificate demands.

Finally, we start spending money: A life raft is prescribed by the “Equipment Guidelines for Yachts under the Swiss Flag”. On two fully printed A 4 pages there ist a total of 36 prescribed safety means, including antiquated oddities such as signaling mirrors, eight torches and rockets, a towing trough of 5 times the length of the ship, drift anchors, shroud cutters, etc. At the latest here, serious consideration is being given to changing the flag state.

That is, because actually I have quite different expenses: the eight batteries are more than ten years old, I don’t want to try God. The gas plant does not have a certificate and must be completely rerouted. The boat builder renews all nine sea valves as a precaution. And as a gift to myself there are mast steps. The future one-handed sailor wants to see the world from above. At least sometimes.